Family culture is an interesting dance. It is one we usually do not realize we are participating in. We have learned the steps over many years and our family can usually be in sync. When additions to the family come, the routine is disrupted and can cause some friction. 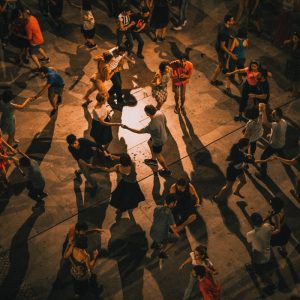 In Zig Ziglar’s ham story, he describes how the bride in a newly married couple cut off the end of the ham before baking it.
Her husband asked why.
The wife responded that her mother always cut of the end of the ham and that was the way it was supposed to be.

More curious than ever, the husband called grandma and asked her why she cut off the end of the ham. The answer was that she had a small oven and that was the only way to get the ham to fit.

Grandma had a reason for cutting off the end of the ham. The next two generations did not. They were blindly following custom without rhyme or reason. It was “the way it was supposed to be.”

In our families, we have some of the same things. Perhaps they are not as silly as the ham story, but it could be simple things as well. Some people like to eat several different flavors of soup on Christmas, some heavy appetizers, some a full meal with Prime Rib, Turkey, Ham, etc. I could go on and on. When a couple gets married, their traditions are rarely the same.

I’ve noticed the dance between mother-in-laws and daughter-in-laws seems to be more difficult during the holidays. Things are done differently and since most of us don’t even realize the cultural dance we are each doing, we cannot identify why the dance is so awkward, there is just a stressed or uncomfortable feeling that begins to brew.

This can be even more difficult if there are more family members that know the dance and the mother-in-law or daughter-in-law are standing there and do not know how to step in. Perhaps one family likes to jump and do the dishes immediately after the meal, where the one person is used to sitting and enjoying the others’ company before cleaning up. Or maybe most of the attendees know where everything goes, but the one person has no idea so they stand back. The host gets offended because the one person is not helping with the clean up. Animosity brews.

The sad thing is that often times, this miscommunication has happened for many years. There was never an invitation to learn the dance. It was just expected that the person would know the steps, because “it was the way it was supposed to be.”

How do we identify that this is happening?

Of course, there are many family situations that cannot be navigated with the suggestions above. In those, the holidays can be painful and often dreaded. It may cause heartache because you long for the time when you used to look forward to this time of year. If that is the case, remember we are here for you. We can help you sort out the hurt and come up with coping strategies.

This course was great it helped me to have a better understanding of myself.  It made me want to be a better person, wife, and parent.  Thank you so much for all that you do Emery Family!

I was pleasantly surprised at how thorough and constructed this program was.  The content was presented in a way that was easy to understand and apply immediately to my marriage.

Any help with marriage is truly appreciated.  Communication skills are so important and needed for a healthy strong marriage.  Thank you Emery!

At Emery Counseling we strive to provide a safe and comfortable

environment to talk about uncomfortable things.

That are here to help you and your family achieve the happiness you deserve and have always wanted.

We have helped work through their issues to realize the attributes, commitments and value of their partner.

Enjoy closer connections, friendly ties and a bond that will last for the rest of their lives because of our services.